Find an ATM or Shared Branch

Don't pay a fee to access your money. Find a Surcharge-Free ATM by entering your zip code below.

It Makes Sense to Belong! 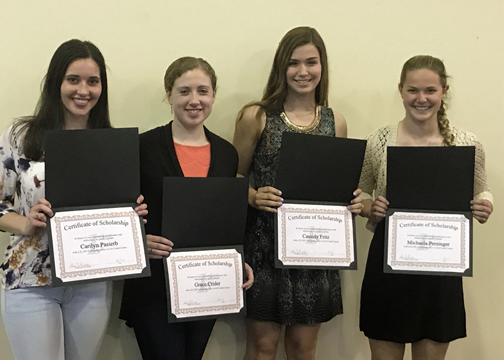 Each student will receive a $1,500 scholarship to be used at the college, university, or trade school of their choice.

Grace Crider will graduate from Shalom Christian Academy in June. She became a member of 4-H when she was eight years old and has since received many local, district, state, and national awards and titles. Grace plays many instruments and serves as the President, Accompanist, Vocalist and Section Leader of the Shalom Christian Academy Chorale. She has also completed two missions trips, one in Bolivia and the other in Guatemala, working with children in the communities.  Grace will attend Charleston Southern University in the fall.

Cassidy Fritz is ranked third in her class at Greencastle-Antrim High School which landed her spots on the Distinguished Honor Roll, National Honor Society and as a Student of the Month. She was selected to be a peer leader in her high school where she is part of a group that focuses on aspects of healthy living and provides fun, interactive events to promote a positive body image and how to avoids drugs and alcohol. In addition to that, she is also a member of the Blue Devil P.R.I.D.E. which is a group that promotes anti-bullying in the school. Cassidy has been accepted to Rollins College and is awaiting acceptance letters from three other colleges and universities.

Carilyn Pasierb will graduate from Chambersburg Area Senior High School in May. Being the captain of her high school’s soccer team taught her leadership skills on and off the field by working with her teammates and coaches. She is also a member of a traveling soccer team where she had the opportunity to compete in two regional championship tournaments with other talented athletes from Florida to New York and receive two state titles. To help her prepare and be successful in college next year, she participated in the “College in High School” Program. Carilyn will attend California University of Pennsylvania in the fall.

Michaela Persinger will graduate from Catoctin High School in June. She was inducted into the National Honor Society in the fall of 2015. Throughout her high school career, she has been a member of the field hockey, basketball, and softball teams as well as a year-round travel softball team. During the summer, she spends her time volunteering with various local sports camps for kids as a mentor and a coach. She has also been a member of a local volunteer fire company for the last four years where she helped with numerous fundraisers and events. Michaela plans to attend McDaniel College in the fall.

Find an ATM or Shared Branch

Don't pay a fee to access your money. Find a Surcharge-Free ATM by entering your zip code below.

It Makes Sense to Belong!

1st Ed Credit Union provides links to web sites of other organizations in order to provide visitors with certain information. A link does not constitute an endorsement of content, viewpoint, policies, products or services of that web site. Once you link to another web site not maintained by 1st Ed Credit Union, you are subject to the terms and conditions of that web site, including but not limited to its privacy policy.

You will be redirected to

Online and Mobile Banking may be unavailable beginning at 5:00 pm until 9:00 pm ET on Tuesday, November 17th for system maintenance. We apologize for any inconvenience.

All 1st Ed branches will be closed on Wednesday, November 11 in observance of Veteran’s Day.